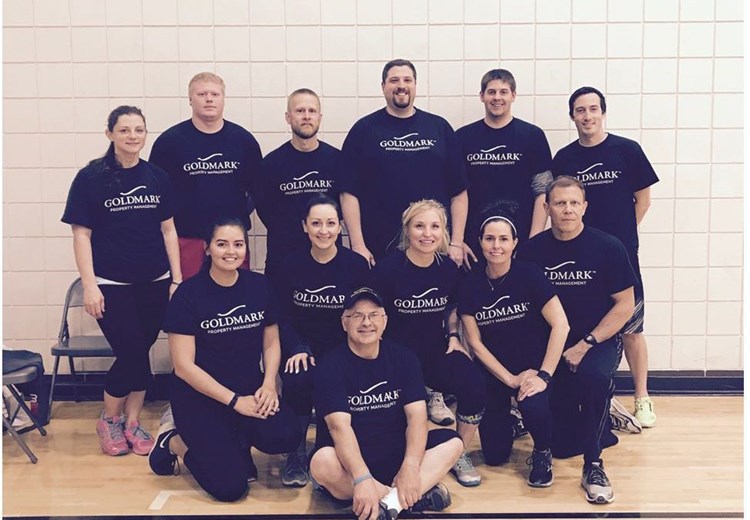 On May 25, 2017, GOLDMARK team members competed as a team at the Fargo, Moorhead and West Fargo Chamber of Commerce Corporate Cup. Improving our rank from 7th place in 2016, this year, we took 5th place out of 31 competing local businesses.

What is the corporate cup?

The Corporate Cup is an event put on by the local Chamber of Commerce. The half-day event consists of a series of activities that promotes wellness and friendly competition among the business community. Teams battle for points in activities such as volleyball, tug of war, and more! The event is open to all team members of all fitness levels.

Teams are comprised of up to 15 male and female participants of various ages and fitness levels. We sent 12 employees ranging in age from 20 to 60 years old. The team consisted of various positions including maintenance technicians, leasing office staff, corporate office members, and even the President himself!

The competition consisted of the following events:

Obstacle course - Although this wasn’t our strongest event, everyone powered through the sprints even with a pulled muscle. Tasks also included hurdles, squats, backwards hopscotch, and a three-legged race!

Tug of war- Although we didn’t claim the tug of war title, we put up a strong fight.

Volleyball - We claimed GOLDMARK’s first ever volleyball victory at the Corporate Cup.

Blindfolded Dodgeball - While trying to avoid rolling any ankles, blindfolded dodgeball was a chaotic struggle that unfortunately didn’t amount to a win.

Kickball - While the team took the kickball victory, our President, Kurt, threw out his back. That didn’t stop him from relentlessly and strenuously cheering on the team for the remainder of the day.

Ultimate Frisbee - With winds gusting around the 30mph range, ultimate frisbee was a challenge for everyone. We ended the match up with a tie with our opponent.

Team Challenge - At the end of the evening, GOLDMARK competed once again as a team to transfer a hula hoop down a chain of team members without breaking the chain until the end, when the hula hoop was thrown around Kurt Bollman, our President.

The team is now resting up, healing a thrown out back, and will soon begin training for the 2018 Corporate Cup.