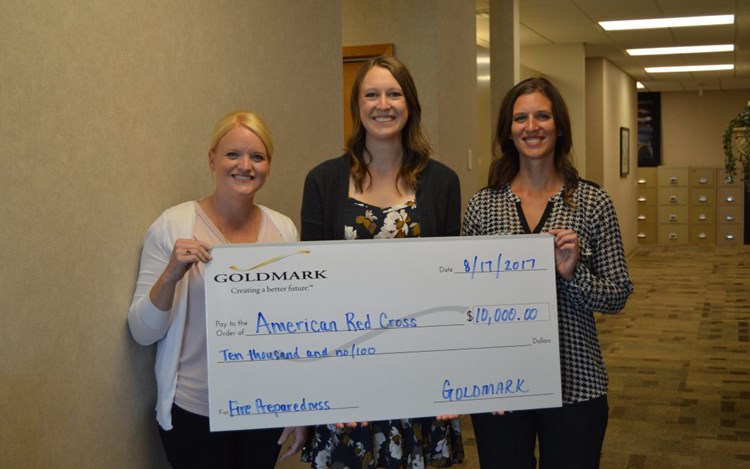 GOLDMARK Partners with the Red Cross in Fire Preparedness

GOLDMARK continued their partnership with the American Red Cross, Eastern North Dakota and Northwestern Minnesota Region by becoming a GOLD Level Sponsor. GOLDMARK contributed to the fire preparedness mission by giving a $10,000 donation to help reduce the number of deaths and injuries from home fires.

The fire preparedness campaign helps save lives by installing free smoke alarms in homes that don't have them, and by educating people about home fire safety.

According to the Red Cross, “The campaign aims to reduce the number of deaths and injuries from home fires by as much as 25 percent over the next five years. Along with installing smoke alarms, the Red Cross is joining with fire departments and community groups nationwide to canvass neighborhoods and teach people all over the United States about fire safety.”

We are excited to not only partner with the American Red Cross financially, but we are also getting ready to send team members to volunteer during the Sound the Alarm Event on October 7.

[Sept 06 2017 Update: Due to natural disasters throughout the country including wild fires and several hurricanes, the Sound the Alarm event has been postponed to Spring of 2018.]

If you would like to join GOLDMARK and the American Red Cross in their mission of fire prevention and preparedness, you can sign up to volunteer here: http://www.redcross.org/local/north-dakota/home-fire-safety#Volunteer-Opportunities

If you are in need of a smoke alarm for your home, or know someone who is in need of one, find more information here: https://getasmokealarm.org/