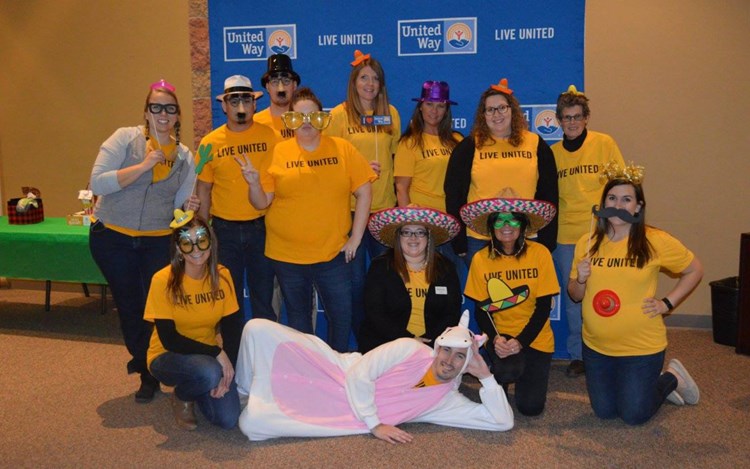 This annual event serves as GOLDMARK’s biggest fundraiser of the year with all proceeds throughout the day benefiting the United Way of Cass-Clay.

Before lunch, team members gathered together to learn about the United Way and the amazing work they do in the Fargo-Moorhead community. The morning started with a viewing of the United Way’s campaign video, followed by a short talk with Christie Gleason, the Resource Development Manager at the United Way, about how the funds we raise go right back into our community.

We also heard from Cody Schuler from the FM Homeless Coalition. He talked with us about the direct impact our dollars have in providing stability and security for those who struggle to find housing by working with community partners such as GOLDMARK to develop and run the Housing First Program.

After the short program, team members enjoyed a free potluck in the form of a taco bar. Team members came together to provide a full taco bar complete with toppings for over 200 hungry employees.

BATTLE OF THE BOSSES BAKE SALE

When lunch came to a close, the annual bake sale began. This year, we pumped things up by pinning two executive team members against each other for the Battle of the Bosses Bake Sale. Jay Duden, Vice President of Operations in Fargo and Kurt Bollman, President went head to head selling hundreds of baked goods provided by team members.

The bake sale worked liked this:

The boss with the most votes at the end of the bake sale would have to wear an adorable unicorn costume to work for a full day. Votes were cast by team members in the form of cash donations in designated bowls for each boss. Each baked good had a minimum value of $1.00, but team members were encouraged to donate at will. With bowls set up for each opponent, Kurt and Jay fought hard to avoid wearing the adorable unicorn costume.

See the Battle of the Bosses promo video here.

Overall 2017 was the best fundraising year to date. With a goal of $15,800, GOLDMARK team members contributed $17,801.07 to the United Way of Cass-Clay! Contributions were given in the form of pledge cards, cash at the bake sale and candygram table where team members could send small candy bags and notes to other team members.

We are so excited by the results of the campaign. We know that the donations will make a great positive impact on others in our community who just need a helping hand.

We can’t wait until next year to see how this campaign will grow!