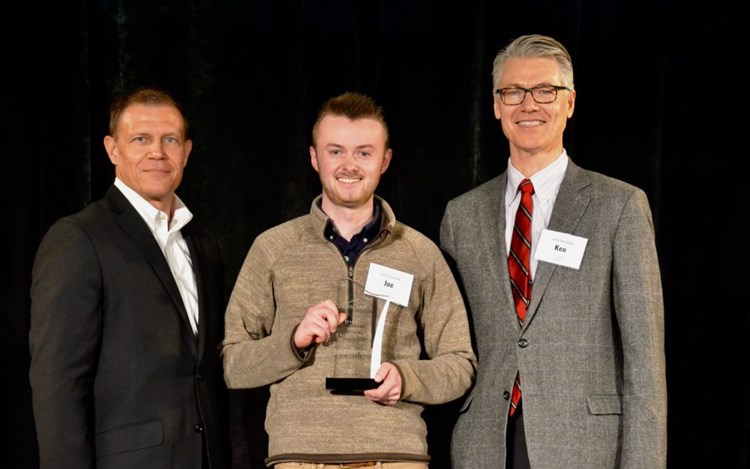 To celebrate another successful year at GOLDMARK, awards were given at the Annual Meeting to honor those who serve GOLDMARK and its customers with the highest level of customer service and dedication.

The GOLD Maintenance awards recognizes Maintenance Techs that consistently provided top notch service, including Kingsley Survey feedback over the past year. The recipients are selected from nominations from the Field Managers.

Gary Bryant - As a Float Maintenance Tech, Gary makes impact across all of Bismarck. He has been on the GOLDMARK team since 2013. He is willing to go above and beyond for his residents and his teammates. He is always there when you need him.

Shane Downing - Shane has been on the GOLDMARK team since 2014. He serves as the preventative maintenance tech for Omaha and also floats to properties needing his assistance. Shane is referred to as the ‘unsung hero of Omaha’. He is willing to help out whenever needed and is known for his positive attitude.

Yassir Jaafar - Yassir is a Senior Maintenance Tech at Place One in Fargo. He joined GOLDMARK in 2015. He is known for his positive attitude and never letting the challenges of a difficult site get him down. Residents are always complimenting his customer oriented service.

Erin Robert - Erin is a Senior Maintenance Tech at the Chestnut Ridge Site in Fargo, and has served on the GOLDMARK team since 2015. She was nominated and recognized for her excellent technical skills and for her willingness to share that knowledge with other techs to help them be successful. Her positive attitude and bright smile brightens everyone’s day.

Providing great service is the cornerstone of what we do. Our values includes a commitment to meet or exceed the reasonable expectations of all of our customers. The 4 Gold Service winners were selected from the nominations submitted by their peers.

Tara rejoined GOLDMARK in 2017 as a Leasing Specialist and was named Business Support Specialist for the Fargo Region later in the year. Tara has carved out a reputation for service in this new role and is noted for her hard work, timeliness and attention to detail. Everyone also appreciates her positive attitude and willingness to help out wherever needed.

Justin joined the 78 Midwest team in 2017 as our IT Support Specialist. He has worked part time and full time while completing his college degree. He is recognized for providing fast service to his customers. He does so with a smile and great patience.

Martel has been on the GOLDMARK team since 2016 and serves customers as Maintenance Tech at the Beacon Hill site in Omaha. He goes above and beyond in service for the residents, ad they adore him not only for his technical skills, but also for his infectious positive attitude and joyful spirit.

Shannon joined GOLDMARK in 2011 and has held a number of different positions, including Site Manager and her current role as Area Manager in Fargo. Shannon was nominated by one of her Site Managers for being a great resource and helpful problem solver. They appreciate her approachable style combined with straightforward communications. In addition to serving her team, she demonstrates sincere care when helping with resident concerns.

Joe joined GOLDMARK Property Management as a Leasing Specialist in 2016 and was named Assistant Site Manager in 2017. Joe is particularly applauded for his teamwork. He is willing to help other at his site, and also has filled in at a number of other sites when needed. He is often a leader in leasing and builds relationships with the residents based on trust and accountability.

It was a brighter day at GOLDMARK in 2013 when Hannah Goodmanson joined the team. We have benefited from her accounting skills on both the property and the company sides of the business. Her bright smile, professional demeanor, and can-do attitude are evident to all who work with her. Hannah now continues to shine as our Business Analyst, where she examines and presents financial information which enables leaders to better manage the business. Hannah is known for her flexibility, her strong work ethic, and dedication to her job, the company, and fellow team members.

Mindy joined GOLDMARK in 2017 and shortly thereafter was named Site Manager of Southgate in Fargo. She quickly established herself as a high performer, consistently leading her team to one of the highest NCR performances in the company. She is team focused and takes great pride in developing and recognizing each one. She also is known for her wise and sensitive service to the residents.

Wanda joined GOLDMARK in 2014 as Assistant Site Manager of Sage Park in Minneapolis. However the residents of the property had already experienced her great service when she served them under a different owner. Wanda is recognized for her dedication and commitment, as demonstrated when she stepped up and covered things when the Site Manager was on leave for two months. Her attention to detail, proactive work, and ability to handle pressure situations well helps head off problems before they ever occur.

It was in 2014 that Amanda joined the GOLDMARK team. She served in leasing roles before being named Site Manager. She manages the Griffin Court Site which she led through a period of rapid growth, to the point that the sit was divided into two separate sites.  Amanda is recognized for leading by example with leasing. She also takes personal pride with the properties in the site and is regularly seen picking up garbage or cleaning sidewalks to ensure residents have a nice place to live. Amanda makes the office fun for her team while leading them to high levels of performance.

For photos of the Annual Meeting and the award recipients, visit our Facebook Album.