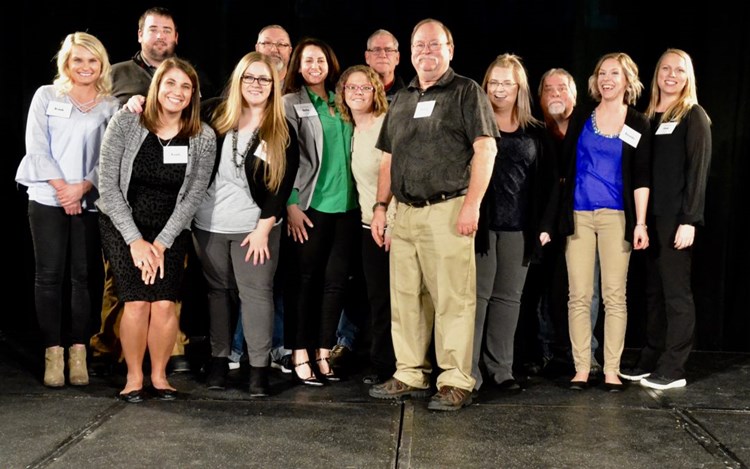 Each year at our Annual Meeting, a time for all GOLDMARK team members to gather to celebrate another great year, we recognize team members for their commitment to serving at GOLDMARK with a Years of Service Awards program. Each milestone year, team members receive a gift card and an additional day of paid time off.

51 team members celebrated 3 years of service. Team member were called to the stage to be recognized.

Dave Bortle  -  Dave joined GOLDMARK June 4, 2007 as a Maintenance Tech in Fargo. Over the years with GOLDMARK Dave has worked at various sites, and currently provides maintenance to the Southgate Site Office.

Ozzie Mejia- Ozzie joined GOLDMARK February 19, 2007 as a Maintenance Tech in Minneapolis. Ozzie has been working at the Deer Park Site Office since 2014.

Jim Motis – Jim joined GOLDMARK August 28, 2007 as a Maintenance Tech in Fargo. In 2015, Jim was promoted to Sr. Maintenance Tech, and currently works at the West Lake Site office.

Jason Anderson – Jason joined GOLDMARK April 9, 2002 as a Leasing Specialist, promoted to Site Manager in 2006, and is currently the Site Manager at the Columbia West site office in Grand Forks.

Jamie Bergseth – Jamie joined GOLDMARK May 7, 2002 as a Leasing Specialist. Jamie was promoted to Operations Support Assistant at the Home office in 2006, and in 2015 promoted to Project Administrator providing support to the Fargo Project Managers.

Dale Hellevang – Dale joined GOLDMARK September 23, 2002 as the Executive Vice President of Human Resources and Learning & Development at the Fargo Home Office. Prior to his hire date, Dale was a Consultant for GOLDMARK for about 2 years.

One team member celebrated 20 years with GOLDMARK in 2017.

Angela Rosenfeldt – Angela joined GOLDMARK in 1997 as a Leasing Specialist in Fargo. In 1998, was promoted to Site Manager for the Maplewood Bend Site Office in Fargo and has been at this site since hired.

An enormous thank you to all of our amazing team members. We're so happy to have such an amazing GOLDMARK family!

Grateful for Our Community

Chance to Win One Month Free