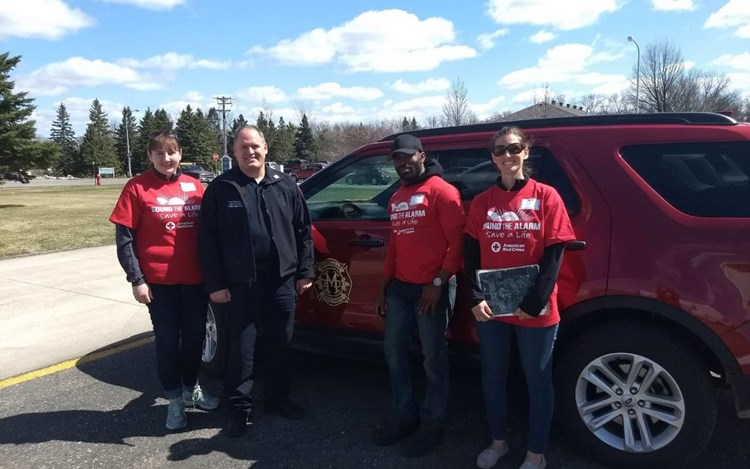 Sounding the Alarm on Fire Safety

Did you know if a fire starts in your home, you may have as little as two minutes to escape?  Early detection from a working smoke alarm, as well as a fire escape plan are two critical elements to saving lives during a fire.

On Saturday, April 28, GOLDMARK team members joined volunteers from across the Fargo, Moorhead and West Fargo area to participate in the American Red Cross "Sound the Alarm. Save a Life." event. Volunteer teams went door-to-door in at-risk neighborhoods checking and replacing smoke alarm batteries. Volunteers also installed free smoke alarms to those without one.  In addition, all residents received fire safety information.  All together, Red Cross volunteers installed 366 free smoke alarms on Saturday.  In addition to volunteering at the event, GOLDMARK was also a GOLD level sponsor through a financial contribution.

The Red Cross Home Fire Campaign was launched in 2014 to help save lives and lessen the number of tragedies attributed to home fires. In the Dakotas Region, the Red Cross has installed 12,300 free smoke alarms, replaced more than 1,000 dead batteries and helped families create over 3,400 home fire escape plans since the campaign began. Across the country, the campaign is making a difference; at least 381 lives have been saved.

If you live with us and are experiencing issues with your smoke alarm, contact us immediately.  If you live elsewhere and are in need of a smoke alarm for your home, or know someone who is in need of one, find more information here: https://getasmokealarm.org/