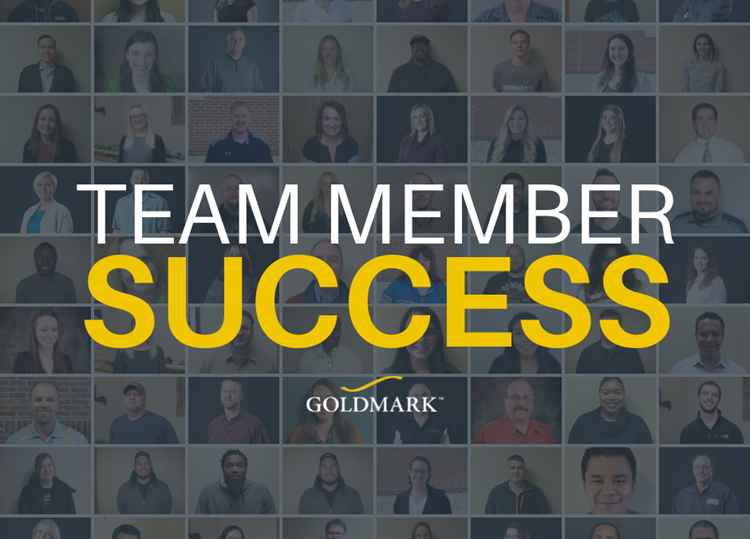 Join us in congratulating our nine team members that were promoted in April.

Nick Binsfeld joined Goldmark in March of 2019 at River North Apartment Community. He quickly realized the leadership his site needed and steamed ahead! Nick’s attention to detail and willingness to take on anything was much needed and appreciated. When he started, Nick dove head first into work. Communicating and keeping his team up to speed, Nick was able to get a rhythm and get things done in a timely manner. Doing so well, Nick has been promoted to Senior Maintenance tech. It was quickly shown that he deserved it! He not only had a full site’s worth of work orders in his lap but without hesitation, started doing tool inventory checks and organizing his shop so he could be as efficient as possible. He is a great worker and a joy to be around! Every day you are sure to get smile from him. We are very thankful to have such a great and reliable person on our team. Congratulations Nick!!!

Tressa Friederichs joined Goldmark in July of 2018 as a Leasing Specialist at Chestnut Ridge. Tressa has used her sills in both child care and the food service industry to be successful in her role. She is energetic and easily holds a conversation with everyone. Her background has helped her problem solve and think on her feet in both the rental process and daily operations. Tressa has been very successful at sales, helping lead the charge in reducing the availability a total of 7.25% during the last five months!! Wow, what a huge accomplishment, Tressa! She says she has a passion for her site and the company. She explained that she is so excited to find a company where she can not just have a job, but a career. Congratulations on your promotion to Assistant Site Manager!

Dalton Vickery joined Goldmark in December of 2018. Dalton was quickly recognized as a huge asset to his sector by providing prompt service to residents, being willing to help with anything that the site team needs and his ability to prioritize his workload and execute well. Dalton was recently promoted to Senior Maintenance Technician and leads the maintenance team at Flagstone/Oxford. He is always there to help and ensure everything is running smoothly. We are thankful we can rely on him for anything. He communicates well with the site team and peers. Our team says that he will always go above and beyond to get the job done. We are so glad to have him on our Goldmark team.

Charisse Piatz started with Goldmark in September 2018 at the Kentwood office as a Leasing Specialist. She has been promoted to Assistant Site Manager at Kentwood. Charisse has an outgoing bubbly personality that makes working with her on a team or interacting with her as a customer enjoyable. She has been successful as a sales leader at the site. She quickly expressed interest and had the drive to do duties above and beyond her leasing role. We are excited for your new career opportunity, you will do great Charisse!

Amanda Huewe is ready to begin her new position within Goldmark as a Business Support Specialist. Amanda joined Goldmark in February 2017 as a Leasing Specialist. She has worked at several sites in the Fargo-Moorhead area. She was promoted to Assistant Site Manager during her time at Danbury before she became the Site Manager team of Flagstone and also supports the Community Office at Oxford. Amanda’s work ethic is what makes her such a strong team member to have. Her manager describes her as always being one step ahead, very organized, detailed oriented and she is always willing to help with anything that is needed. Congratulations Amanda on your new position within Goldmark.

Pamela Hron has been promoted to Site Manager at Flagstone. Pamela was previously the Assistant Site Manager at Danbury and most recently Place One. Pamela joined Goldmark in January 2018. Pamela is often a top leasing agent and is described by her team as a very hard working and a dedicated team member. Pamela is also a licensed real estate agent at Keller Williams which is a hobby for her in her free time. Pamela enjoys camping and spending time with friends. Fun fact: Pamela was hired as a referral by Mindi Larson and has since also referred two others to join the Goldmark family. Congratulations Pamela on your recent promotion!

Saad Janjua has been promoted Site Manager Unassigned. Saad is originally from Pakistan and came to the US for school in 2014. He attended MSUM graduating with degrees in Communications and International Relations. He believes in his leadership and in helping people and he has proven this by keeping Southgate consistently in the top 5 for availability as their Community Office Manager. Conversations with Saad reveal that he prides himself on motivating his team and he isn’t afraid of hard work. His desire to continue to learn and seek feedback will do him well as he moves towards success as a Site Manager. Congratulations Saad!

Wendy Jondahl started with Goldmark in September 2013 as a Property Accountant. She has been promoted to Senior Property Accountant at the Home Office. Wendy is a team player willing to accept new challenges and always willing help others. We are excited for Wendy to take on this new career opportunity!

Jen Caturia is the newest member of the Minneapolis Regional Operations team. She started her Goldmark career as a Leasing Specialist for Georgetown on the River in 2016. Her ability to face any challenge with a smile on her face and a positive attitude was one of the things that helped earn her the promotion. We know she will be a great asset to our team with her attention to detail and dedication to ‘red carpet’ customer service.

Congratulations to everyone on their promotions! We are lucky to have you as apart of our Goldmark Family!